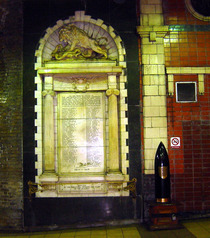 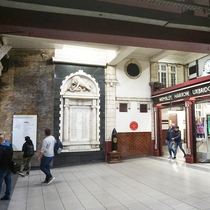 The men from the service of the Metropolitan Railway Company whose names are inscribed below were among those who, at the call of King and country, left all that was dear to them, endured hardness, faced danger, and finally passed out of sight of men by the path of duty and self-sacrifice, giving up their own lives that others might live in freedom.
Let those who come after see to it that their names be not forgotten.
{Below are 2 columns of 68 names each, in alphabetic sequence, with one more at the end in the centre. See the Subjects Commemorated for the names. 'Arthur Lewis' does appear twice. Following the list is:}
1914 - 1918
Erected by the directors, officers and staff of the railway.

Made of Carrara marble. The list of names is contained within an arch composed of fluted Ionic columns supporting an allegorical statue group depicting a lion overcoming a serpent. It was designed by C.W. Clark and unveiled by Sir Clarendon Hyde, the deputy chairman, on 11 November 1920.

2019: Via Facebook Keith Scholey told us that the London Metropolitan Archives hold a Roll of Honour which gives the full name, occupation, rank and regiment, and date of death of all these men. Many thanks Keith.

This site can be found at the east bound Circle Line platform. To the right of the monument there is an unusual charity collecting box made of a war-time shell. There is a slot for coins in the top and a brass shield on the front, inscribed: "12 inch high explosive shell, presented by Messrs Vicers Ltd, Barrrow Works. Donations to the Railway Benevolent Institution for Disabled & Distressed Railwaymen, Widows & Orphans."

We thank our colleague Alan Patient for spotting the red plaque in 2018 and sending us the photos. Note that, prior to the arrival of this plaque, the white wall used to be terracotta tiles but was presumably painted so that the red plaque would stand out.

This section lists the subjects commemorated on the memorial on this page:
Baker Street war memorial

This section lists the subjects who helped to create/erect the memorial on this page:
Baker Street war memorial

Sir Clarendon Hyde, the deputy chairman of the Metropolitan Railway Company i...

This section lists the other memorials at the same location as the memorial on this page:
Baker Street war memorial