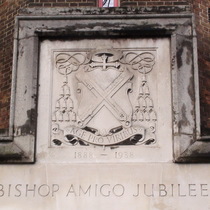 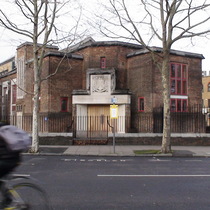 The Latin translates as "Work with all your might" and we think this may have been Archbishop Amigo's adopted motto.

This 1914 map shows the site before the hall was built. Barbel Street, running parallel to St George's Road but on the other side of the church, was lined with terraced housing.

From St George's Cathedral: "Land adjacent to the cathedral had been bought on the corner of Lambeth Road and Barbel Street. Five houses in Barbel Street were demolished and work started early in 1939. The new hall was blessed and opened by Archbishop Amigo on 3rd February 1940." The jubilee celebrated in the name is the 50 years since Bishop Peter Amigo was ordained in 1888.

The British Pathe film of Amigo's funeral procession shows his body lying in state in this hall and being carried out on its way to the funeral service at Westminster Cathedral.

This section lists the subjects commemorated on the memorial on this page:
Archbishop Amigo Jubilee Hall

Site of Cripplegate, demolished 1760. Corporation of the City of London