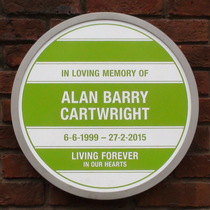 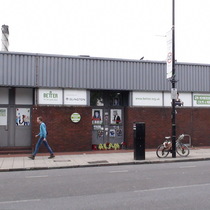 Memorials to murdered young people can be very moving, and extensive. This one used to stretch for more than 7 metres along the side of this building, as shown in one of our photos. 7 months after the crime the murderer was brought to court and sentenced to life.

November 2015 we read that the memorial has suffered an arson attack and the family are intending to remove the remains and hope to get a plaque erected.

August 2018: The plaque has been erected and all the other stuff is much reduced. We note also that a white bike has been chained to a lamp post and adorned with memorabilia. Cartwright was riding his bike here when he was attacked but 'ghost bikes' are normally used for people killed by collision with motor traffic.

This section lists the subjects commemorated on the memorial on this page:
Alan Cartwright - plaque

This section lists the other memorials at the same location as the memorial on this page:
Alan Cartwright - plaque

The Legend of Mary OverieLegend suggests that before the construction of Lond...