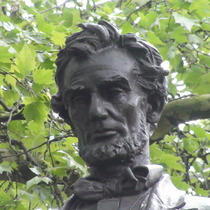 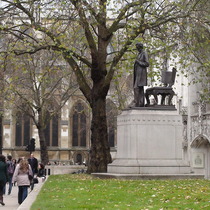 {On the front of the plinth:}
Abraham Lincoln

Copy of the statue in Lincoln Park, Chicago (other copies being in Mexico City, Los Angeles and Cambridge, Mass.).  This is not the first statue intended for this site; that was not considered statesmanlike enough for the proximity to Parliament and was sent to Manchester instead.

The Parliament Square statue was intended for erection in 1914 to celebrate the centenary of the end of the 'War of 1812' - the last time, to date, that the US and Britain were at war. The unveiling was delayed, for obvious reasons, and was eventually carried out after the war. The statue was ceremonially presented by the American people and accepted by PM David Lloyd George at an event in Central Hall.

This statue is known as 'Standing Lincoln', in contrast to that in Washington DC where Lincoln is seated in a giant chair, here he is provided with a similarly uncomfortable looking chair but sensibly does not sit down.   If he did he would enter the select club of London seated statues – see Peabody.

This section lists the subjects commemorated on the memorial on this page:
Abraham Lincoln statue

16th President of the USA. Born Kentucky. Assassinated while watching a very ...

This section lists the subjects who helped to create/erect the memorial on this page:
Abraham Lincoln statue

Sculptor.  Born Dublin to a French father and Irish mother.  The family emigr...

The 'statue' represents his passion for cycling. It is topped by a cormorant,...