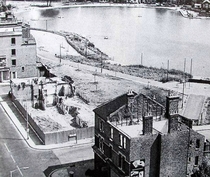 A German Zeppelin dropped a 300-pound ordnance bomb, known as an ‘aerial torpedo’, on to the corner of Calmington and Albany Roads. 12 people were killed, and three policemen risked their lives in rescuing twelve people from a basement while the fire raged above them.

The ruined building is shown, centre left, in the photograph. This came from Southwark News where you can learn more about the rescue.

This section lists the memorials where the subject on this page is commemorated:
Zeppelin raid - Burgess Park

Following a 2016 campaign another memorial was erected nearby to commemorate ...

We are indebted to Derek Smith for the following write-up of the siege: The S...