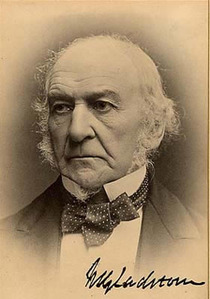 Born in Liverpool. Liberal Prime Minister four times. One of the Commissioners for the Great Exhibition. Queen Victoria moaned that "He speaks to me as if I were a public meeting". Caroline's Miscellany has a good piece about Gladstone's orphans. Died at Hawarden near Chester.

Gladstone's body lay in state in Westminster Hall and the funeral was at the very nearby Westminster Abbey on the 28th, the last day of the lying-in-state. Wikipedia says "His coffin was transported on the London Underground before his state funeral at Westminster Abbey". (Elsewhere we read that this was in recognition of him and his wife having been extremely early users - passengers on a trial tube ride in May 1862.) It certainly was not the most direct route to the Abbey, just across the road. The nearest station to both the departure and arrival points would have been Westminster (Bridge) Station .... on the Circle Line..... Did they really take the coffin for a complete circuit, prior to the funeral?

We thought Gladstone may be unique in his final underground journey (horizontal, rather than vertical, if you see what we mean) but then we read about Dr Barnardo's journey on the Central Line. And writing about that we realised that Gladstone's tube journey probably took place before his lying in state, the last leg of the journey from Hawarden. Google Maps recommends a train into Euston and then the Victoria Line (not available in 1898) or the Northern Line to Charing Cross/Embankment.

His father's family was one of the largest slave-holding families in the world and when slavery was abolished Gladstone helped his father obtain the equivalent of about £10 million in official compensation.

This section lists the memorials where the subject on this page is commemorated:
William Ewart Gladstone

One of only a handful of London statues known to have been unveiled in the su...

This section lists the memorials created by the subject on this page:
William Ewart Gladstone

Politician.  Father of Winston.  Born at 3 Wilton Terrace, son of the 7th Duk...

Poet and cricket lover, author of 'The Hound of Heaven'. Born Preston, Lanc...