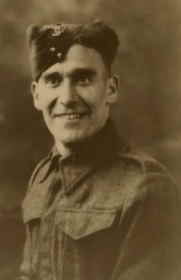 Lance Bombardier William Edward Black. He was born on 19 April 1909 at 49 Norman Road, Bow, the son of George William Black and Ann Maria Black, nee Corney. His father was a Printing Ink Maker. He married Florence Annie Law on 20 July 1935 at Hackney Register Office and they had one son, David William Black.

He joined the 85th Anti-Tank Regiment, Royal Artillery, service number 1107544, and they were captured and made prisoners of war on 15 February 1942 in Singapore. In 1944 he was placed aboard the Hofuku Maru, a 5,825 tons cargo ship that sailed from Singapore to Miri, Borneo as part of convoy SHIMI-05. The convoy consisted of 10 ships, 5 of which carried, in total, 5,000 POWs, all in appalling conditions. At Borneo, the Hofuku Maru left the convoy with engine problems, and sailed on to the Philippines, arriving on 19th July. She remained in Manila until mid-September while the engines were repaired. The POWs remained on board, suffering terribly from disease, hunger, and thirst.

On 20th September, Convoy MATA-27 - with 11 ships including the Hofuku Maru (the only one carrying POWs) sailed from Manila and anchored at Subic Bay for the night. On the 21st as it headed for Takao Formosa the convoy was attacked by American carrier aircraft about 80 miles north of Corregidor. At 10:35am the planes from the USS Hornet attacked the Hofuku Maru and before the day was finished the entire convoy had been sunk by more than 100 American planes. Of those on the Hofuku Maru, 1,047 of the 1,289 British and Dutch POWs died, including William Edward Black who was aged 35 years. As he has no known grave he is also commemorated on Column 9 of the Singapore Memorial, Kranji War Cemetery, Singapore.

This section lists the memorials where the subject on this page is commemorated:
William E. Black

The inclusion of the caretaker and his wife on this memorial is intriguing. ...