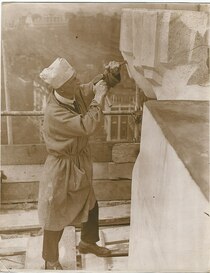 W. C. H. King was a sculptor. He was born in Cheltenham in 1884 and died in 1973. He was apprenticed to a firm of architectural sculptors at the age of 16 where he engaged in training for wood carving, stone carving and modelling. He studied at Cheltenham Art School and Birmingham Art School and then won the Landseer Scholarship for Sculpture to the Academy Schools attached to the Royal Academy of Arts. King worked closely with Gilbert Bayes and with Charles Wheeler.

After graduating he lived in London and took both public and private commissions. Particularly important ones were the sculpting of war memorials after the First World War, the most famous of which is the Dover Marine War Memorial where a plaque reads: ‘This bronze group created in 1922 represents the figure of Victory, battered by conflict yet still holding aloft the Torch of Truth. She is flanked by a soldier and a sailor, determined despite weariness. Behind her strides a bugler who has just sounded the Last Post over the fallen… it was dedicated to the memory of the railwaymen who gave their lives in the First World War.’

He went on to work for various architects, including Edwin Lutyens, one famous commission was the miniature figures for the model of the new Liverpool Cathedral started in 1933. He also produced sculptures for civic buildings and corporate buildings such as St Pancras Town Hall (now Camden Town Hall), on Euston Road, and Shell Mex House (overlooking Savoy Place).

King created a plaque of J. M. W. Turner on the building where he used to live on Queen Anne Street in London. This must have been a particularly interesting commission for King given his early inspiration at the age of 14 to become an artist after seeing the Turners that were exhibited in the National Gallery. Another important work was the sculpture of Christ the King for All Souls College, Oxford in 1940. He exhibited at the Royal Academy of Arts from 1910. In 1949 he was made president of the Royal Society of British Sculptors, now the Royal Society of Sculptors. Subsequently he received the Gold Medal for Distinguished Service to Sculpture from the Royal Society of British Sculptors.

Our gratitude to Susan Caffrey (King's granddaughter) and her daughter, Adele Caffrey, who have written the above text and drawn our attention to the photograph.

The photograph is captioned: "The sculptor WCH King on the roof of Shell Mex House with one of his four sculptures in carved stone surrounding the clock."

This section lists the memorials created by the subject on this page:
William Charles Holland King