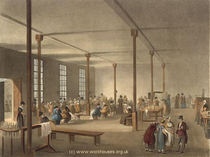 The parish of St James Piccadilly erected a workhouse on Poland Street in 1725 for the able-bodied poor. This was taken over by the newly-formed Westminster Union in 1868. The workhouse closed in or shortly after 1913.

In 1914 the site was used for housing wartime refugees - 200 Russian Jews, mostly from Antwerp. It became the Poland Street Institute for Jews. 1925 much of the site was reconstructed as a garage, but not the western section where the plaque is found.

More information at Workhouses - St James's which supplies our image of the workhouse in 1809.

This section lists the memorials where the subject on this page is commemorated:
Westminster Union Workhouse / St James Workhouse

Née Martin. In 1922 she became the first woman chartered surveyor and for 51 ...

Anglican vicar.  Born Sussex, his father being a cousin of Lord Jellicoe. Wor...