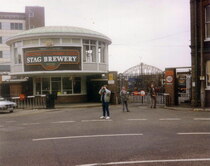 In 1837 James Watney (1800 - 84) became a partner in the Stag Brewery, Pimlico and the Watney family were the main partners there for much of the 19th century. In 1889 James Watney & Co., acquired the Mortlake Brewery (latterly referred to as the Stag Brewery of Mortlake - pictured), which had been owned by Charles James Philips and James Wigan since the 1840s. in 1898, following acquisitions it became known as Watney Combe Reid.

This section lists the memorials where the subject on this page is commemorated:
Watney Combe Reid

This section lists the memorials created by the subject on this page:
Watney Combe Reid

Born Aberdeen. An authoritative figure in the Victorian banking community, he...