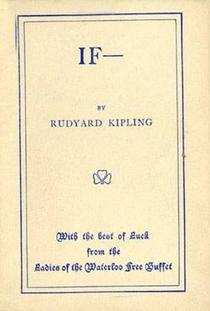 We could not find a picture of the buffet but we did find this image of a leaflet which the ladies gave to each of the men they served.
The Kipling Journal, September 1932 contains: In addition to their good work in feeding hungry and tired soldiers during the war, the Ladies of the Waterloo Free Buffet presented every visitor with a souvenir in the shape of the leaflet of "If," with an imprint on the cover, "With the best of Luck from the Ladies of the Waterloo Free Buffet." Captain A. A. Carnell writes as follows:—'During the War my late wife worked all through at the Ladies' Buffet at Waterloo Station. Mr. Kipling kindly gave permission for these ladies to have printed for distribution to all the men who passed through copies of "If." . . . He was kind enough to sign six.' There is also a note on the secretary's page about this leaflet, a copy of which Captain Carnell very kindly sent to us.

This section lists the memorials where the subject on this page is commemorated:
Waterloo Free Buffet

Sculptor.  From the picture source: "He has written books on architectural hi...