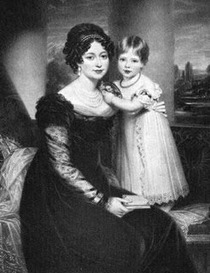 Born Coberg. Mother of Queen Victoria. Her first marriage to Prince of Leiningen produced two children. Widowed, she married again in 1818 to Prince Edward, Duke of Kent at Coburg, (and again at Kew Palace). The queen-to-be, Victoria, was born a year later and, only 9 months, later Edward died. At this stage baby Victoria was third in line to the throne so, despite money worries, the Duchess decided to stay in England rather than return home to Germany, even though she and the king, William IV, did not get on. The Duchess kept a close watch over her daughter even making her share a bedroom until Victoria's accession to the throne in 1837. She had hoped to become regent but Victoria turned 18 shortly before William died. It was not until Victoria married and the grandchildren arrived that the relationship between the queen and the Duchess really improved. Died at Windsor just 9 months before Prince Albert.
The picture shows her in 1821 with her daughter, Victoria.

This section lists the memorials where the subject on this page is commemorated:
Victoria, Duchess of Kent

We identified which particular Duchess of Kent is represented by finding the...