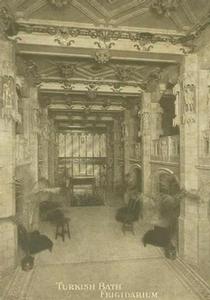 The picture shows the frigidarium, with statues in niches near the tops of the columns.

The Turkish baths, constructed as part of the 1913 extension to the Imperial Hotel, were the subject of an early campaign by the Victorian Society, which failed and the baths were demolished, with the rest of the hotel, in 1966. But the statues were rescued and now sit in the courtyard of the new hotel, just down Russell Square, at Imperial Hotel - statues.

This section lists the memorials where the subject on this page is commemorated:
Turkish baths at Imperial Hotel

Modernist architect. We can find no information about him and no image, so fo...