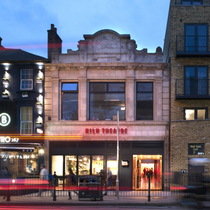 Originally opened as a home for the Wakefield Tricycle Company which started in a room behind the Pindar of Wakefield pub in King's Cross.

Inside the foyer of the Tricycle Theatre/Cinema is a plaque that reads: "The Foresters Hall was first opened in 1929. It became the permanent home of the Tricycle Theatre Company, founded by Ken Chubb and Shirley Barrie in 1980, through the support of Brent Borough Council, Greater London Council and the Arts Council of Great Britain. In May 1987 the building was almost entirely destroyed by a fire, which spread from a neighbouring timber-yard. An extensive re-building programme was funded by ..... The Tricycle Theatre .... re-opened on 14th September 1989."

In 1998, a cinema was added to the site, with an entrance in Buckley Road. April 2018, to much controversy, the name was changed to 'the Kiln Theatre'.

This section lists the memorials where the subject on this page is commemorated:
Tricycle Theatre / Kiln Theatre

Londonist has some interesting facts about this theatre.