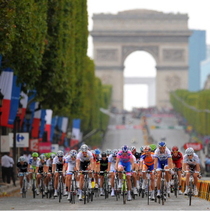 Multiple stage bicycle race, which has been held annually (apart from the world wars) since its inception. Its first organiser was Henri Desgrange, and originally it ran around the perimeter of France, but now usually includes sections in neighbouring countries. The course covers a variety of terrains, with the winner of each section being awarded a 'maillot jaune' (yellow jersey). The cyclist who receives the jersey after the last stage which finishes at the Arc de Triomphe in Paris is declared the overall winner.

This section lists the memorials where the subject on this page is commemorated:
Tour de France

A race on the River Thames, now run annually between Oxford and Cambridge uni...