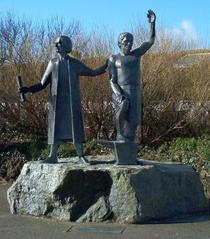 Lawyer, born in Bodmin, Cornwall. In 1497, King Henry VII needed to raise money for a war against Scotland, and imposed a country-wide tax. Cornishmen couldn't see that the war was anything to do with them, and Flamank along with Michael Joseph an Gof, raised a force of around 15,000 men, and marched on London. They camped at Blackheath before fighting the diastrous battle of Deptford Bridge. Flamank and Gof were captured and hanged, drawn and quartered at Tyburn.

This section lists the memorials where the subject on this page is commemorated:
Thomas Flamank

Leading figure in the Mexican Revolution, the main leader of the peasant revo...

Born in Guangdong province, China. A leader in the revolution which overthrew...