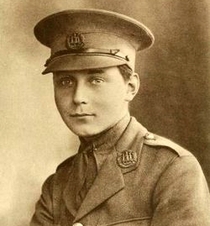 Soldier. Born Thomas Riversdale Colyer-Fergusson a the site of the W1 plaque. He was an acting captain in the 2nd Battalion, The Northamptonshire Regiment. During the Battle of Pilckem Ridge at Bellewaarde, Belgium, with only a sergeant and five other men, he succeeded in capturing an enemy trench and a machine gun, which he managed to turn on the gunners. Later, assisted only by his sergeant, he captured a second machine gun. He was killed soon after by a sniper's bullet. For his actions, he was awarded the Victoria Cross.

In 1924 his father, also Thomas, inherited the baronetcy of Spitalhaugh (now extinct). His brother Max died in WW2.

This section lists the memorials where the subject on this page is commemorated:
Thomas Colyer-Fergusson VC

There must be many men who were awarded the VC, posthumously or not, whose bi...

{Below an image of a Victoria Cross medal:} Captain Thomas Colyer-Fergusson, ...

Bombardier R.F.A.. Fought but did not die in WW1