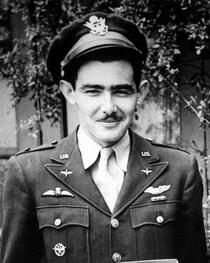 Lieutenant Colonel Thomas J. Andrews was born on 24 May 1921 in Costa Mesa, California, USA. He was a service pilot training at the Dallas Aviation School, Texas, USA, when he joined the Royal Air Force Volunteer Reserve and as a Flying Officer was, on 7 September 1941 attached to No.71 Squadron. During Operation Jubilee he led the squadron's Blue Flight.

In September 1942 the squadron, together with the other two Eagle squadrons, was transferred to the US Army Air Forces, becoming the 334th Fighter Squadron of the 4th Fighter Group. On 13 April 1943 he was appointed (acting) Squadron Commanding Officer and two days later he was designated Flight Commander 'A' Flight. On 2 June 1942 he became the Squadron Operations Officer and was promoted to the rank of Major on 5 July 1943.

He retired from the USAF as a Lieutenant Colonel having been awarded the Distinguished Flying Cross (DFC), the Air Medal with 2 Oak Leaf Cluster and the World War II Victory Medal.

He died, aged 73 years, on 4 March 1995 in Melbourne, Florida, USA and was buried in Section 38, Site 889 in Arlington National Cemetery, Arlington, Virginia, USA.

This section lists the memorials where the subject on this page is commemorated:
Thomas Andrews