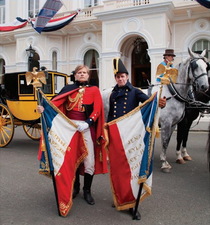 Following victory at the Battle of Waterloo, the Duke of Wellington’s personal handwritten record of events, the Waterloo Dispatch, was carried to London by Major Henry Percy, an aide de camp to the Duke. The 4-page Dispatch was published in a London Gazette Extraordinary and is addressed to the War Secretary, Lord Bathurst. Arrived in London, Percy has trouble finding first Bathurst and then other men that he wishes to inform. Putting various accounts together conjures up a picture of Percy richocheting around London, following one lead after another.

Once he's found Bathurst it's not too clear who he is looking for. The obvious candidates include: the Prince Regent, the Prime Minister, the Foreign Secretary. The more research we do the less certain we are about who he was after. See what you think.

Taking with him two French Imperial Eagles (some accounts say 4, but the Dispatch says 2 and we aren't going to argue with the Duke), still attached to their staffs, captured at Waterloo, Percy left Belgium on 18 June, travelling by post chaise from Brussels to Ostend where he embarked in HMS Peruvian, under the command of Commander James White.

Kent Life adds "... halfway across the Channel, the wind dropped and Percy and his naval companions, including Peruvian’s captain James White, boarded a small boat to row ashore, landing at Broadstairs."

On landing Percy continued post chaise to London. arriving on 21st June. The short version has him going direct to Grosvenor Square but London Online add an extra London stop-off for Major Percy. He first went to the Colonial Office in Downing Street. Arbuthnot was there and saw the carriage with "French standards sticking out of the windows". He knew that the whole cabinet were dining at 44 Grosvenor Square so he got in and directed the carriage there. (We aren't too sure who 'Arbuthot' was, possibly Sir William Arbuthnot, 1st baronet.) Some versions of the story have Commander White also in the carriage from Broadstairs, some even have him starting with Percy in Belgium (which is surely wrong). The carriage on this leg of the journey might have been quite full, with Percy, White, Arbuthnot and up to four French eagles (but no hens).

We don’t know what course the dinner had reached when Percy arrived at 44 Grosvenor Square but presumably the host, the Earl of Harrowby, did not mind his little social gathering being upstaged by the first official announcement in Britain of an event of such significance.

Major Percy then continued his journey, next stop St James's Square. Here the Foreign Secretary, Castlereagh, had his London home, at number 18. Lord and Lady Castlereagh had their 24-year old niece, Emma Edgecumbe, staying with them, and many year later, as Lady Brownlow, she published ‘Slight Reminiscences of a Septuagenarian’ in which she tells a story remarkably similar to Arbuthnot's: "I was sitting quietly alone at Lord Castlereagh's, when suddenly there came the sound of shouting and the rush of a crowd; and on running to the window to discover the cause of all this noise, I saw a post-chaise and four, with three of the French eagles projecting out of its windows, dash across the square to Lord Castlereagh's door. In a moment the horses' heads were turned, and away went the chaise to Mrs. Boehm's." The assumption is that Percy had knocked at the door, asked for Lord Castlereagh and been told that he was at a party two doors away.

We know from British History Online that the Castlereaghs' house (rebuilt since) was on the corner of St James's Square with its front door on the north side of King Street, and presumably there were windows overlooking the Square. Seems odd that the route from Grosvenor Square to a front door in King Street took the carriage across St James's Square. And also odd that they all piled back into the carriage and "turned the horses' heads", since their destination was practically next door; walking would have been quicker. Even odder: why did Major Percy go to Castlereagh's home at all? As the Foreign Secretary Castlereagh should have been at the Grosvenor Square Cabinet dinner in which case Percy had already given him the news. Or, as British History Online has it, he was at the St James's Square party with the Prince Regent (we can understand that preference) in which case surely the people at Grosvenor Square would have known that and directed Percy there, not to Castlereagh's home.

We have our suspicions that Lady Brownlow, furious at having missed all the fun (through not being at the party) and having heard Arbuthnot's story, concocted this version of events, whereby she saw the carriage arrive before anyone at the party knew anything. But then we are distrustful cynics. At least she didn't insist on squeezing herself into the crowded carriage.

Finally, arriving at 16 St James’s Square, Percy found not just the Foreign Secretary but also the Prince Regent, at whose feet, he laid the French eagles. Job done.

We were not previously aware of "The Waterloo Way" and wondered whether it even existed as a concept, until the 200th anniversary when "The New Waterloo Dispatch: Celebrating the idea that is Europe" was created. "It promotes the essential values that spring from both the battle and the Congress: Leadership, Enterprise, Respect and Co-operation. These are values that ring true today." Since then we've rather given up "celebrating the idea that is Europe" haven't we?.

But we do have that project to thank for the photo, taken during the re-enactment of the arrival in St James's Square, and found in the book ‘Waterloo Messenger: The Life of Henry Percy’ by William Mahon.

Note that neither of the two addresses to which the Dispatch was delivered is still occupied by the building from that time.

Incidentally, we came across a forum which discusses reports that the news was actually brought by telegraph. We understand that the first electric telegraph was constructed in Hammersmith in 1816 by Sir Francis Ronalds, but these things are never cut and dried.

Watching the morale-boosting 1943 film "The Demi-Paradise" we were pleased to be shown an English town where the annual historical pageant always featured the tableau of the Stagecoach Bringing of the News of Waterloo, introduced to a Russian visitor as "I expect you'll find we win, we usually manage to".

Compare and contrast The Trafalgar Way.

This section lists the memorials where the subject on this page is commemorated:
The Waterloo Way

Major Vernon A. Boehle was born on 26 May 1915 in Indianapolis, Marion County...