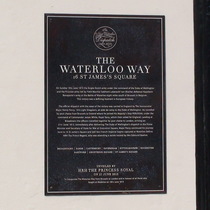 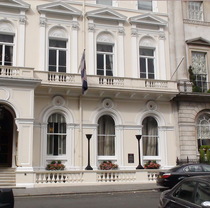 On Sunday 18th June 1815 the Anglo-Dutch army under the command of the Duke of Wellington and the Prussian army led by Field Marshal Gebhard Leberecht von Blucher defeated Napoleon Bonaparte’s army at the Battle of Waterloo eight miles south of Brussels in Belgium. This victory was a defining moment in European history.

The official dispatch with the news of the victory was carried to England by the Honourable Major Henry Percy, 14th Light Dragoons, an aide de camp to the Duke of Wellington. He travelled by post chaise from Brussels to Ostend where he joined His Majesty’s Ship Peruvian, under the command of Commander James White, Royal Navy, which then sailed forEngland. Landing at Broadstairs the officers travelled together by post chaise to London, arriving on 21st June 1815. Immediately after delivering The Duke of Wellington’s dispatch to the Prime Minster and Secretary of State for War at Grosvenor Square, Major Percy continued his journey here to 16 St James’s Square and laid two French Imperial Eagles captured at Waterloo before HRH The Prince Regent, who was attending a Soiree hosted by Mrs Edmund Boehm.

Unveiled by HRH The Princess Royal on 21 June 2015, to inaugurate The Waterloo Way from Brussels to London and in honour of all those who fought at Waterloo on 18th June 1815.

From British History Online: 1804 the Boehms bought the St James's Square site from Viscount Thomas Anson and by 1807 they had constructed their house in which they frequently welcomed high society for parties and soirees. In 1820 the house was sold due to Boehm's bankruptcy. 1844-9 the house was used by two clubs, successively. 1850 The India Club moved in. They then bought number 17 and had the two properties rebuilt as a single club-house in 1865. This means that the current building is not the one in which Percy delivered the Waterloo Dispatch to the Prince Regent.

See the Waterloo Way for the story of the Dispatch.

This section lists the subjects commemorated on the memorial on this page:
The Waterloo Way - St James's

members of the Allied armies who died in Battle of Waterloo

Our picture comes from Londonist's review of an exhibition of the photographs...

This section lists the subjects who helped to create/erect the memorial on this page:
The Waterloo Way - St James's

To the glory of God &amp; in memory of William Benett, Esquire, these schools...