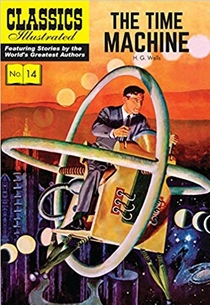 Novella by H.G. Wells. The unnamed hero of the book travels on the eponymous machine to the year 802,701. Initially he finds the world has become an idyllic place populated by a childlike race called the Eloi. He however, soon learns the truth when he discovers another race called the Morlocks, who live underground, and do all the work. In return for this, they prey upon the Eloi for their food. He eventually travels further and further into the future to find an increasingly desolate world. On his return he tells his friends of his experiences, but they refuse to believe him. He sets off on another journey, and is never seen again.

This section lists the memorials where the subject on this page is commemorated:
The Time Machine

H.G. Wells writer lived in this house in 1894 whilst writing The Time Machine...