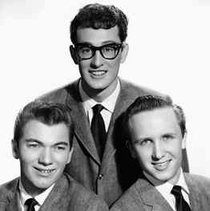 Musicians. The backing group of Buddy Holly. Originally, the group comprised Niki Sullivan on rhythm guitar, Jerry Allison on drums, and Joe Mauldin on bass, but Sullivan dropped out after a year or so. After Holly's death, they continued performing with several changes in the line-up. The photo shows: (left to right) Allison, Holly and Mauldin.

This section lists the memorials where the subject on this page is commemorated:
The Crickets

We took a (very bad) photo of this plaque some years ago. The theatre was clo...