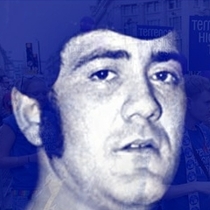 AIDS victim. Born Terrence Lionel Seymour Higgins (known as Terry) in Priory Mount Hospital, Haverfordwest, Pembrokeshire. He joined the Royal Navy, but as a gay man, he came into conflict with the prevailing hostility towards homosexuality in the services. It is believed that the authorities refused to discharge him on the grounds of his sexuality, so he painted hammer and sickle motifs around his ship, and was formally charged and asked to leave.

Moving to London he worked as a computer operator and barman. In the summer of 1981 he began to lose weight, developing a persistent rash and gradually becoming weaker. In April 1982 he collapsed on the dance floor at the gay disco Heaven, and was taken to St Thomas's Hospital. He discharged himself after a number of days when doctors were unable to diagnose or treat his condition. In the middle of June he collapsed again and was readmitted to the isolation unit, where he eventually died.

Pneumonia was given as the cause of death. This came at a time of increasing concern in the gay community over an apparently new disease affecting the immune system of a number of gay men in America. In the autumn of 1982, a growing number of articles in the United Kingdom focused on what had been termed the Acquired Immune Deficiency Syndrome (AIDS). Although Britain's first AIDS case had been reported in The Lancet in 1981, it was the death of Higgins that brought the disease fully into public view. His friends used his death as a platform for further action, and eventually set up the Terrence Higgins Trust.

This section lists the memorials where the subject on this page is commemorated:
Terrence Higgins

{Around the logo of the Terrence Higgins Trust:} The first meeting of the Ter...

An Anglican catechumen from South Africa who was killed by her animist parent...