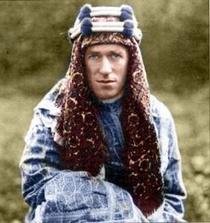 Intelligence officer and author. Born at Woodlands, Tremadoc, Caernarvonshire. He joined the archaeological team of Sir Flinders Petrie at Carchemish on the Euphrates, where he first met the Bedouins. In World War I, he worked for army intelligence in North Africa, and went on to fight with Arab irregular troops against the forces of the Ottoman Empire. His account of the Arab revolt, 'The Seven Pillars of Wisdom' became a classic of war literature. After the war, in order to escape his fame, he enlisted in the Royal Air Force under the name of John Hume Ross, and when exposed, joined the Royal Tank Corps as T.E. Shaw. He was thrown from his motorcycle when he swerved to avoid hitting some boys near his home in Dorset, and died five days later in Bovington Camp Hospital. Peter O'Toole played him in the 1962 film 'Lawrence of Arabia'.

The details of history can sometimes make it read more like farce than heroics. In the famous camel charge at Aqaba Lawrence, firing as he charged, accidentally shot his camel in the back of the head. The camel died, Lawrence was thrown from the saddle, and took no more part in the battle.

This section lists the memorials where the subject on this page is commemorated:
T. E. Lawrence