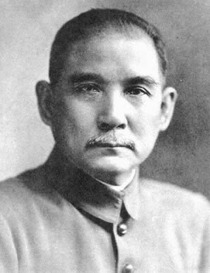 Born in Guangdong province, China. A leader in the revolution which overthrew the Qing dynasty in China in 1911.

Qualified as a medical doctor in 1892 in Hong Kong. Often a wanted man in China he escaped at various times to Japan, United States and London.

Arrived in London on 3 October 1896.  Dr James Cantlie, the Scotsman who had been Sun’s teacher and friend in Hong Kong, helped him find lodgings at 8 Gray’s Inn Place (no longer standing; site of the plaque). From here Sun could walk to the British Museum to study and walk to visit Dr Cantlie (probably in the Harley Street area).

However his route across London was badly chosen since, on Sunday 11 October as he walked to the Cantlie’s he was approached by some Chinese men who, while chatting with him, bundled him into a house which he found to be the Chinese Legation, at 49 Portland Place (now the Chinese Embassy). Here he was kept prisoner and fully expected to be smuggled back to China for execution.

On Saturday 17th Sun managed to get a message out to Cantlie who struggled to get anyone to take the situation seriously. He tried the police, the Foreign Office, the newspapers, the law. Eventually the press shamed the government into action and Sun was released on Friday 23rd, 12 days after his capture.

He spent some time recovering with the Cantlies and then returned to his political campaign, travelling the world and, following the 1911 Xinhai Revolution, he became President of the Republic of China.

This is a brief version of the story much better told at Kidnap in London. We are left wondering why Dr Cantlie does not have his own plaque.

This section lists the memorials where the subject on this page is commemorated:
Sun Yat-Sen

Town located on the Itz River in Germany. First mentioned in a document in 10...