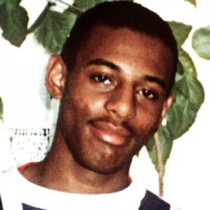 Murder victim. Born Stephen Adrian Lawrence in Greenwich District Hospital. He attended the Blackheath Bluecoat School, and was studying to become an architect. On the night of 22nd April 1993, he was returning home with a friend, when a gang of five attacked and stabbed him. He died shortly afterwards from his wounds. Five suspects were arrested, but charges were dropped through lack of evidence. A year later, the Lawrence family initiated a private prosecution against the same five. Charges against two of them were dropped and the other three were acquitted, (again through lack of sufficient evidence).
In 2011, two of the original suspects (Gary Dobson and David Norris) were re-arrested, put on trial again and found guilty of the murder. This trial was only made possible, because of the revocation in 2003. of the 'double jeopardy' act which debarred a person from being tried again for the same crime.

This section lists the memorials where the subject on this page is commemorated:
Stephen Lawrence

The plaque has been vandalised several times. The original one had to be repl...

Entry in The Peerage. Son of the distiller William Nicholson. For more inform...