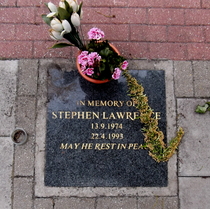 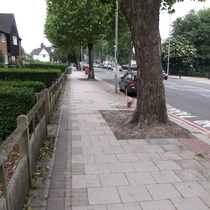 The plaque has been vandalised several times. The original one had to be replaced as it was damaged beyond repair. Gordon W. Newton is a stonemason who maintains the memorial.

2019: Kent Online confirmed: Gordon Newton, together with his daughter Elaine, from The Stone Shop at East Farleigh, donated the first memorial. Following vandalism The Stone Shop replaced it in 1995. Following more damage the new memorial was installed 18 April 2019, in time for the 26th anniversary of the murder.

This is the site of Stephen's murder.

This section lists the subjects commemorated on the memorial on this page:
Stephen Lawrence - Eltham

This section lists the subjects who helped to create/erect the memorial on this page:
Stephen Lawrence - Eltham

OranjehavenThis building served as a club endowed in 1942 by Her Majesty Quee...

The Triffids recorded their classic album Born Sandy Devotional on this site ...