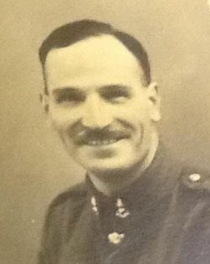 Andrew Behan has kindly carried out some research on this man: Staff Serjeant Charles Roberts was born on 25 May 1904 in Kilsyth, Stirlingshire, Scotland, the son of George Thomas Roberts and Mary Roberts. His father was a Coal Miner. On 10 April 1925 he married Janet Bennie Provan in Banton, Kilsyth, Stirlingshire. He was a Motor Engineer, living at 41 Charles Street, Kilsyth and his wife was a Cotton Power-loom Weaver. He joined the Royal Engineers, Service Number 2971038.

From Find a Grave we learnt that he was one of the team from 1 Bomb Disposal Company, Royal Engineers attending on 13 December 1940 at an unexploded bomb which had fallen on the 5th December at 590 Romford Road, Manor Park, London. Staff Sergeant Roberts was on listening watch on the stethoscope at safe distance and asked to change places as he was getting cramped and cold. A few minutes later the bomb exploded, the clockwork fuse was not heard ticking so it is believed that the anti disturbance-fuse detonated the bomb. He died, aged 36 years old and is buried in Extn 3 Grave 879 at the Kilsyth Cemetery, Kilsyth, North Lanarkshire. (Kilsyth changed from Stirlingshire to North Lanarkshire in 1995).

Andrew comments on the spelling of Serjeant / Sergeant: The British Army did not change the spelling until November 1953 according to the Commonwealth War Graves Commission. The Rifles still use a 'j' even now. The RAF never used a 'j' in their 100 year history. We blame the Americans.

This section lists the memorials where the subject on this page is commemorated:
Staff Sergeant Roberts