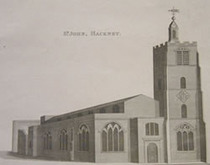 Built as St Augustines by the end of the 13th century, probably on grounds belonging to the Knights Templar. When this order was taken over by the Order of St John, the church was renamed St John at Hackney. The congregation increased and the church was altered to accommodate them. Eventually a new church was needed, was built alongside in 1791 and is still there today (to the north-east) with a war memorial in front of it.

The old church became redundant, and was demolished in 1798 but the tower was kept to house the bells since the new church lacked a steeple. Even when this was built in 1814 the bells stayed in the old tower because the new steeple was not strong enough to bear their weight. (We expect the project manager lost his job at this stage.) In 1854 the new church was underpinned and, at last, the bells could be moved there. By which time no one could be bothered to demolish the old tower. The picture source has more history.

This section lists the memorials where the subject on this page is commemorated:
St Augustine church, Hackney

Tower of Church of Saint Augustine Built by the end of the 13th century. Ded...