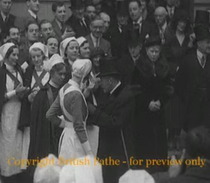 Nurse. Born East London. From Stephen's Study Room: "At the time of her EGM award she was a Nursing Sister at the Middlesex Hospital {Foley Street}, London. On the 26 January 1934, Sister Thomas was working as a Theatre Sister in one of the Operating Theatres, when an explosion occurred in a large oxygen cylinder. Sparks and flames shot from the cylinder through the door of the anaesthetic room across the theatre for a distance of about 15 feet. Sister Thomas remained behind until everyone was removed from the theatre and, despite the risk of the cylinder exploding, she went back into the anaesthetic room and managed to turn off the oxygen cylinder."

In 1940 the EGM was discontinued and recipients were obliged to exchange it for the George Cross.

She died in Chelmsford. The picture comes from a Pathé film of her receiving her medal in 1934 but annoyingly she never faces the camera.

This section lists the memorials where the subject on this page is commemorated:
Sister Dorothy Louise Thomas GC

Founded by Thomas Linacre in 1518 with a charter granted by Henry VIII. Thei...