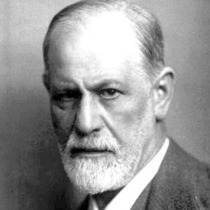 Founding father of psychoanalysis. Born Morovia. In 1860 the family settled in Vienna where he studied, began his career and married. In 1875 he visited his half-brothers in Manchester, and again in 1907 when he also visited London. Freud gained followers and contacts, one of whom was Ernest Jones, a London-based neurologist. In 1923 Freud's cancer of the mouth/jaw was diagnosed and treated. In 1930 Jones convinced Freud that he, with his family, must leave Austria, and arranged for 17 UK entry permits. They travelled in a number of small groups. Freud, his wife and daughter Anna arrived at Victoria Station on 6 June 1938. The crowd of press people awaiting his arrival caused the train to be redirected to another platform.

Freud and his family briefly lived at 39 Elsworthy Road before moving to the house in Maresfield Road, provided by the  British Psycho-Analytical Society.  At first he had many visitors and continued to work but the cancer had become inoperable and insufferable and, with Anna's agreement, Freud arranged for his doctor to administer the necessary amount of morphine, and died the next day at Maresfield Gardens. His body was cremated at Golders Green crematorium and his ashes are still there, along with those of other family members including his daughter, Anna.

This section lists the memorials where the subject on this page is commemorated:
Sigmund Freud

Surgeon and anatomist. Born Norfolk. Studied at St Thomas's. 1800 he was appo...