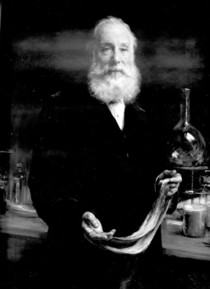 Chemist. Born King David's Lane, Shadwell. While a student at the Royal College of Chemistry, aged 18 he discovered the first aniline dyestuff while working in his home laboratory. He dropped out of college and with his family's support he opened a chemical factory at Greenford Green (where there is now a plaque) and began manufacturing the dye, the first mauve. His plaque says that he "went on to found science-based industry". We understand the words (and discovered that SBI is even a recognised acronyn) but aren't too sure of the significance since we would have thought that SBI dates back to at least the beginning of the industrial revolution in the 18th century. Died at home in Sudbury.

This section lists the memorials where the subject on this page is commemorated:
Sir William Henry Perkin, FRS

See Londonist's excellent post How Television Was Invented In London. We love...