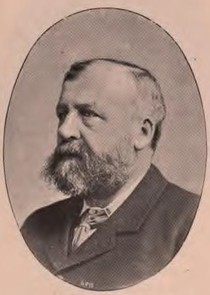 Banker and Liberal politician. Made baronet, of Overbury Court in 1905. Wikipedia have a page but it is pretty dull. Initially we could find no picture of him and intended to show the stamp he used on the outer covers of his books, as one does: 'RBM with a pine marten passant", but then Wikipedia added a photo.

2016: Tom Long took on the RBM challenge and, referring to Kelly’s Handbook 1901 and The Daily News November 8, 1906, he tells us:
Sir Richard Biddulph Martin, Bt. was Chairman of Martin's Bank. The London, Edinburgh and Glasgow Assurance Company opened an account with Martin's Bank in c.1886, in the year the company was formed. It may be reasonable to assume that Martin had a good relationship with the directors of the Company and that was why, or partly why, he was invited to lay the foundation stone.

Also from Tom, a few other random facts about RBM: leading light in the Statistical Society (Council member, Treasurer etc.); "manager" at the Sun Life Assurance Society in 1869; trustee of the Governments (sic) Stock Investment Company, Limited in 1886; chairman of The Assets Realisation Company, Limited in 1887; chairman of the General Committee of the City Liberal Club in 1887; Liberal MP; created baronet in c.1905, but had no heir, so baronetcy became extinct on his death; died leaving £335,509.

This section lists the memorials where the subject on this page is commemorated:
Sir Richard Biddulph Martin

The first ever local authority estate under tenants' control in Britain. Beca...