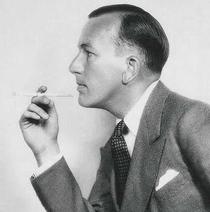 Plays include: 'Private Lives' and 'Blithe Spirit'. The film 'Brief Encounter' was based on his play. Songs include: 'Mad Dogs and Englishmen'. On the film 'In Which We Serve' Coward was writer, actor, composer and co-director. Acted in the original 1969 'Italian Job' film.

Early in WW2 he worked for the British Secret Service in America using his influence to encourage US involvement in the war. In the 1941 Blitz he wrote and sang the lovely 'London Pride' ('is a flower that's free').

Coward's homosexuality was an open secret, which, given its illegality at the time, was all it could be.

This section lists the memorials where the subject on this page is commemorated:
Sir Noel Coward

Actor. Daughter of Debbie Reynolds and singer Eddie Fisher. She made her film...

Film producer. Born Sandor Kellner in Hungary. In 1933 had a big success with...