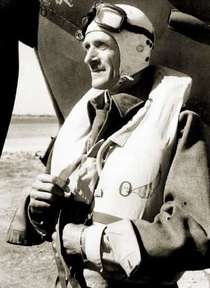 Air Chief Marshal. Born New Zealand. Working in the NZ merchant navy when WW1 came along. Volunteered first for the NZ navy but transferred and worked for a time in the British army. On being wounded he got himself transferred to the Royal Flying Corps. Married a London girl. Successful career with rapid promotions. In 1940 he reached Air Vice-Marshal. One of the organisers of the successful Dunkirk evacuation. Commanded number 11 group Fighter Command which defended London and South East England successfully during the Battle of Britain. At the time the value of his tactics was not recognised and he left 11 group unrecognised. By 1947 his importance was acknowledged in a quote from Lord Tedder, chief of the air staff: "If ever any one man won the Battle of Britain, he did. I don't believe it is realised how much that one man, with his leadership, his calm judgement and his skill, did to save not only this country, but the world." And in 1948 a Southern Railway locomotive was named after him.

Went on to work in Argentina for Hawker Siddeley and in New Zealand as a local councillor and for charities. Died Auckland.

This section lists the memorials where the subject on this page is commemorated:
Sir Keith Park