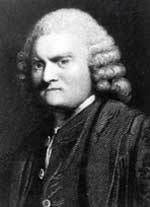 Military physician. Born Roxburghshire, Scotland. Studied in Flanders/Netherlands, where he later returned in his role as military phusician, and Paris. Initiated the idea of battle-field hospitals being neutral territory. 1748 settled in London, continued medical practice and published papers  Wrote a well-respected work on typhus. President of the Royal Society 1772-8. Died a few days after suffering a probably stroke at his club, Watson's in the Strand.

This section lists the memorials where the subject on this page is commemorated:
Sir John Pringle