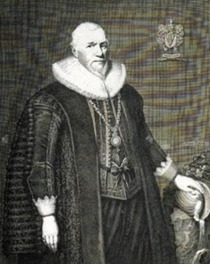 Goldsmith and entrepreneur. Born Denbigh, Wales sometime 1555-60, younger brother of Sir Thomas Myddelton (c1550-1631) who became Lord Mayor of London. 1576 came to London to be an apprentice goldsmith. Entered the livery in 1592 and practised extremely successfully in Cheapside. Stayed in close contact with Wales and was repeatedly MP for Denbigh established the New River Company which constructed the New River bringing much needed fresh water from Hertfordshire to London. This remained the most important source of piped water in London for 300 years. Robert Stephenson considered him 'the first English Engineer'.

The spelling of his name is inconsistent: Middelton, Middleton, Myddleton, etc. We have chosen that used by the ODNB.

This section lists the memorials where the subject on this page is commemorated:
Sir Hugh Myddelton

From Dartford Archive: "In the early days the company specialised in heavy fo...

A utility company which supplied water to parts of West London. It was establ...

Horologist. Born in Sunderland. During his lifetime, he was considered to be ...