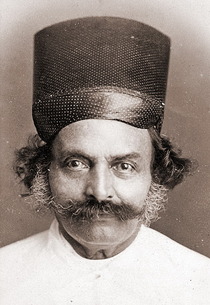 Companion of the Star of India, a wealthy Parsi gentleman of Bombay. His grandfather and two great-uncles had made their names, literally, in the opium trade with China (facilitated by the British). They all adopted the nick-name as surname (sometimes given as Ready Money). Mainly through intermarriage they all had the same heir, lucky Cowasjee.

He entered business, as a trader, and also became a commissioner of income tax. Went on to become a JP, etc. Built colleges, hospitals, insane asylums, etc. in Bombay. Knighted for his philanthropy.

This section lists the memorials where the subject on this page is commemorated:
Sir Cowasjee Jehangir Readymoney

{On a modern plaque:} This fountain erected by the Metropolitan Drinking Fou...

This section lists the memorials created by the subject on this page:
Sir Cowasjee Jehangir Readymoney

{On a modern plaque:} This fountain erected by the Metropolitan Drinking Fou...

Army officer and engineer. Born Woolwich, the son of a professor at the Royal...

Founded to represent members of the civil engineering profession worldwide. B...