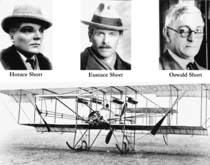 Pioneering aeronautical engineers. Oswald and Eustace formed a partnership in 1897, initially working on balloons. They supplied Charles Rolls, amongst others. In 1908 Horace joined, the company was registered as Short Brothers and they began manufacturing aeroplanes. This is credited with being the world's first aircraft manufacturing company.

They designed and built the first British powered aircraft to complete a circular flight of a mile. They created Britain's first purpose-built aircraft factory, on an aerodrome on the Isle of Sheppey, Kent. 1943 the company was nationalised.

Eustace and Horace were buried at Hampstead Cemetery, Fortune Green. 2017: the graves are in a "shocking state" with no information about the brothers' achievement, and there is a campaign to rectify this.

This section lists the memorials where the subject on this page is commemorated:
Short Brothers

Wing Commander. Born Simla, India. Leader of the Dambusters Raid for which he...