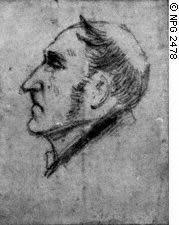 Born in Plymouth, son of the Solicitor to the Admiralty. He studied in London and then travelled to Italy for about 12 years, returning to London. Became President of the Royal Academy in 1850 and in 1855 added Director of the National Gallery to his portfolio. Our colleague, Andrew Behan, has also provided some information.

On 9 April 1849 he married Elizabeth Rigby (1809-1893) in the Parish Church of St Cuthbert, 5 Lothian Road, Edinburgh, Scotland. He was knighted in 1850 on his election as President of the Royal Academy and the 1851 census shows him as an artist living at Fitzroy Square, Marylebone, with his wife, two male and four female servants. In the 1861 census he is recorded as an artist & President of the Royal Academy residing at 7 Fitzroy Square, Marylebone, with his wife, a cook, a ladies maid, a housemaid, a kitchen-maid, a butler, a footman, together with a coachman & his wife and two sons.

He died, aged 72 years, on 24 December 1865 in Pisa, Italy and he was buried in Cimitero Accatolico, Piazzalle Donatello, Florence, Italy. His body was subsequently exhumed and brought back to England where it was buried in Kensal Green Cemetery, Harrow Road, London, W10 4RA. Probate records show that his will was proved by his widow on 10 May 1866 and his effects were valued at under £40,000.

This section lists the memorials where the subject on this page is commemorated:
Sir Charles Eastlake