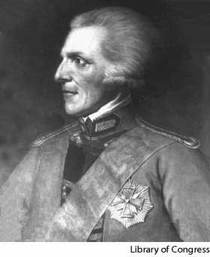 Having spied for the British in America he moved to England in 1776, was knighted by King George III, moved to Germany where he gained the title Count Rumford. His scientific work included investigating the force of gunpowder and demonstrating that heat is a form of energy. He also worked on the cultivation of potatoes and invented the Rumford Soup (particularly nutritious for the poor). Other inventions: the Rumford fireplace, a drip coffeepot. With Sir Joseph Banks he established the Royal Institution.

Marrying the widow of Lavoisier (the French chemist) in 1804 he move to Paris where he stayed until his death at Auteuil near Paris.

This section lists the memorials where the subject on this page is commemorated:
Sir Benjamin Thompson, Count Rumford

Held in in the Methodist Central Hall, Westminster. Eleanor Roosevelt was a ...