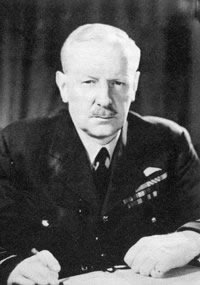 Marshal of the Royal Air Force BT, GCB, OBE, AFC.
Born Cheltenham. Died at home at Goring-on-Thames.
Appointed Commander-in-Chief, Bomber Command in 1942. He quickly made his command very successful, but was criticised then and later, for the policy of bombing civilians, whole cities, rather than targeting specific strategic objectives. This policy and his success led to bombing raids such as the destruction of the civilian city of Cologne, the fire-storming of Hamburg which killed 40,000 people in 3 days. A similar assault on Dresden, even less justified in terms of the city's strategic importance, led to a criticism from Churchill himself. Harris did not receive the peerage awarded to others of similar military rank after the war. The controversy flared again when the statue in the Strand was erected.

Known as "Bert" to his colleagues, as, apparently, are all men with the name "Harris" - a naval tradition.

This section lists the memorials where the subject on this page is commemorated:
Sir Arthur Harris, "Bomber Harris"

Soldier. Born as Lee James McClure (he later took his stepfather's surname) i...