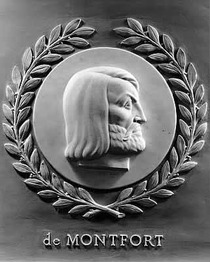 6th Earl of Leicester. Born France, with connections to French and English aristocracy. Married Eleanor, Henry III's sister in 1238. Built the Savoy Palace in 1245. Leader of the Second Barons' War of 1263–64 following which he ruled for a year and introduced some parliamentary reforms. Montfort's Great Parliament of 1265 initiated what later became the House of Commons. Killed at the Battle of Evesham by forces loyal to Henry.

There is a legend about Henry, Simon's son, in which Henry is blinded and nursed to health by a baroness with whom he had a son, Besse. Henry used to beg, with his son, at what is now the junction of Whitechapel Road and Sidney Road, where there is now a pub named after him, in that role. In 1900 Bethnal Green Borough adopted this image in its blazon.

This section lists the memorials where the subject on this page is commemorated:
Simon de Montfort

Clerk to the Commissioners of the 1892 Westminster Public Baths and Wash-hous...

Warden of the Spanish and Portuguese Jews Hospital.

The revolt grew out of the increasing severity of the poll taxes imposed on t...