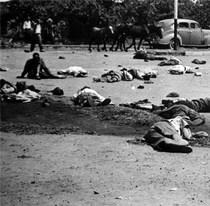 This took place near the police station in the South African township of Sharpeville in Transvaal (today part of Gauteng). After a day of demonstrations against pass laws (these were an internal passport system, designed to segregate the population), a crowd of about 5,000 to 7,000 black protesters went to the station where the police opened fire on them, killing 69 people. Sources disagree as to the behaviour of the crowd; some state that the crowd was peaceful, while others said they had been hurling stones at the police, and that the shooting started when they began advancing towards the fence around the station. Since 1994, 21st March has been commemorated as Human Rights Day in South Africa.

This section lists the memorials where the subject on this page is commemorated:
Sharpeville Massacre

{On the large plaque with an image of protesters on a map of Africa:} Sharpev...