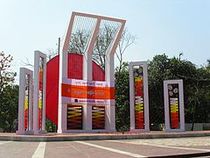 Those killed during the Bengali Language Movement demonstrations in 1952. At this time Bangladesh was part of Eastern Pakistan and the rulers of Pakistan were seeking to impose Urdu on the Bengalis as the sole official language of the country. On 21st February 1952, at the University of Dhaka, the Pakistani police force opened fire and killed dozens of Bengali students and political activists who were protesting for state recognition of the mother tongue, Bangla, also known as Bengali. Afterwards, a makeshift memorial was erected at the site of the massacre, near Dhaka Medical College and Ramna Park, but this was soon removed by the Pakistani police force.

The Bengali Language Movement grew in strength and in 1956, after a prolonged struggle, Bangla was given the same status as Urdu. In 1957 work began on a new Shaheed Minar designed by Hamidur Rahman. Progress was delayed by the introduction of martial law and subsequently the memorial was demolished, this time by the Pakistani army.

Following the independence of Bangladesh, the monument was rebuilt and the Language Movement Martyrs are remembered at the Shaheed Minar every year.

Bengalis are the only race in the world known to have given blood and fought a liberation war which originated from a struggle to preserve their language and culture.

This text comes from information panels in Altab Ali Park,

This section lists the memorials where the subject on this page is commemorated:
Shaheed Minar martyrs