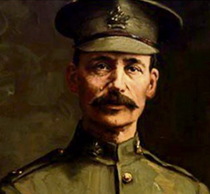 Born as Frederick John Hobson. From our Picture source, the excellent Camden New Journal: "... joined the army aged 24 and was deployed to fight in the Boer War. After he was discharged, he spent a period living with his wife and children in Canada before returning to England to rejoin British forces. He then {WW1} fought in France, where he was killed in action. He was awarded the Victoria Cross for his actions facing an enemy counter-attack near Lens on 18 August 1917. After a shell killed all but one of his comrades, Sergeant Hobson, despite not being a gunner, grabbed a weapon and leapt from the trench at the advancing enemy. He was killed by a gunshot wound, but by then he had delayed enemy forces long enough for reinforcements to arrive."

Enlisted with the Central Ontario Regiment, Canadian Expeditionary Force in November 1914. He has no tombstone anywhere, and his name is only on the Vimy Memorial. We thank local historian, Henry Fitzhugh, for this information.

This section lists the memorials where the subject on this page is commemorated:
Sergeant Frederick Hobson VC

This plaque was unveiled on the centenary of his death.

R. Navy. Fought but did not die in WW1. Andrew Behan has kindly provided thi...

Name on one of the corner plaques of the East Ham WW1 memorial.

Lee Patrick Baisden was born on 23 September 1970, the son of Patrick John Ba...