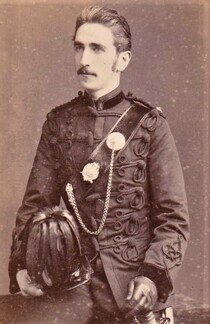 Clive Fleetwood Pritchard was born in 1864 in Canonbury, the eldest of the eight children of Andrew Goring Pritchard (1834-1928) and Marianne Pritchard née Titford (1839-1920). His birth was registered in the first quarter of 1864 in Islington and his father was a solicitor.

The 1871 census shows him as a scholar, boarding at the home of Mary E. Stevens, a 75-year old widow who was an annuitant and her 45-year old niece, Emily Bryant, who was single and a teacher/governess at The Briers, Tonbridge Road, Maidstone, Kent. Also resident were three other scholars.

He gained entry into Pembroke College, Cambridge, on 7 October 1882 and graduated with a BA in 1885. He was admitted to the Inner Temple on 29 October 1885 and in 1886 he was granted a commission in the London Rifle Brigade. He was Called to the Bar on 19 November 1888.

The 1891 census shows him living at 3 Pond Street, Hampstead, with his parents, four of his siblings and three female domestic servants. His occupation was recorded as a Barrister at Law.

The Post Office London Directory of 1895 lists him at 6 Pump Court, Temple, EC and gives his residence as 1 Maisemore Court, Canfield Gardens, Hampstead, NW, but the 1900 edition shows his chambers at 3 Temple Gardens, EC and his residence as 6 Compayne Gardens, West Hampstead.

When the Metropolitan Borough of Hampstead was created in 1900 he was chosen as an alderman. On the night of the 1901 census the returns show him as a Barrister at Law, living at 6 Compayne Gardens, Hampstead, with a house parlour-maid and a cook, whilst his wife and four children, together with a nurse, a sewing maid and an under nurse were shown at 'Baverstock', 6 Sudley Road, Bognor, Sussex.

He served as the second mayor of the Metropolitan Borough of Hampstead from 1902 to 1903. Electoral registers from 1905 onwards show his address to be 17 Maresfield Gardens, Hampstead and the 1911 census confirms this address and shows him as a barrister, living there, a seventeen-roomed house, with his wife, three of his children, a cook, a housemaid, a parlour-maid and a between-maid.

He died, aged 50 years, on 10 August 1914, whilst away from home at Craven Cottage, Southwold, Suffolk and when probate was granted to his widow and one of his younger brothers his estate totalled £58,473-18s-8d.

This section lists the memorials created by the subject on this page:
C. F. Pritchard

Borough of Hampstead This tree was planted by the Mayor, Mr Alderman C. F. Pr...

Following victory at the Battle of Waterloo, the Duke of Wellington’s persona...