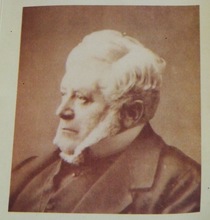 Gothic revival architect. Born Hillside, Crooms Hill, Greenwich, of Huguenot origin. He designed a number of churches, including the 1862 St Mark's in North Woolwich Road E16, now the Brick Lane Music Hall. And some country houses including the 1856-60 remodelling of Shadwell Lodge for the widowed Lady Hannah Buxton (née Fry, 1783–1872, married Thomas Fowell Buxton). Thus he was chosen for the Buxton memorial.

Died at home: Tensleys, The Green, Hampstead. A desk-based archaeological assessment says: "Notable occupants of Tensleys include the French diplomat Talleyrand ..., Sir Francis Palgrave ... and in the 1860’s and 1870’s by Samual Sanders Teulan {sic} ... the architect of St Stephen’s church constructed on the Green during the same period." Teulon's neighbour for many years was Sir Rowland Hill. St Stephen's is considered Teulon's masterpiece, though he died before completing it and it was finished by Ewan Christian.

Note: Since Teulon's St Marks church is nowhere near Brick Lane we were interested in why its current use is as the "Brick Lane Music Hall". We thought it must be something to do with Teulon's sponsors, the Buxtons and their brewery being in Brick Lane. But it seems that is just a co-incidence: the Music Hall started in 1992 in Brick Lane and has kept the name through its incarnations in Shoreditch and now Silvertown.

English Buildings have a good post on Teulon's church in Huntley, Gloucestershire.

This section lists the memorials created by the subject on this page:
Samuel Sanders Teulon