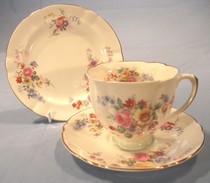 Ceramic manufacturing company. Began with a factory at Vauxhall Walk, Lambeth. Initially a partnership of John Doulton, Martha Jones, and John Watts, Jones left in 1820 leaving the company name as Doulton & Watts. John Watts retired and in 1853 the company became Doulton & Co. It was Henry Doulton who introduced art ceramics into the business.

In 1907/8 Mary Watts asked Royal Doulton to make tiles for the Postman's Park memorial. We wondered if this indicated that John Watts was related to G. F. Watts and that explained the commission but we think not. By this time G. F. Watts was dead and Mary Watts was forced to find another maker because De Morgan had ceased making tiles. She never liked Doulton's tiles nor, apparently, her husband's family so it seems unlikely that she chose Doultons for any familial reason.

The brand still exists, owned by a conglomerate, but the company folded in 2009.

We cannot discover whether the John Watts of Doulton & Watts was related in any way to G. F. Watts.

Other work in London includes: A corridor in St Thomas's Hospital is decorated with a number of lovely large Doulton panels depicting nursery rhymes, presumably saved when a children's ward was demolished. Some of the decorative elements on the nearby Beaufoy Institute are probably by Doulton.

This section lists the memorials created by the subject on this page:
Royal Doulton / Doulton Potteries

An information board near an entrance to the gardens informs: "Euterpe the M...

From Dartford Archive: "In the early days the company specialised in heavy fo...

Born Bishop's Stortford. Studied at Lambeth School of Art where she was a stu...