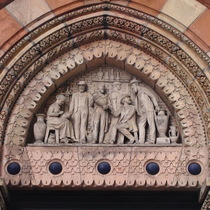 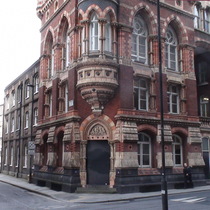 {A plinth at the lower right carries Tinworth's monogram}:
GT

Other than the man in the background this is a sculpture of high relief showing six figures. English Buildings identifies Henry Doulton (seated towards the right); Hannah Barlow (the only woman, seated at the left); George Tinworth (centre, holding the pot) leaving three unnamed figures: the man carrying the board of pots is probably an anonymous worker; the other two may be, anonymous, customers.

Built 1878 by R. Stark Wilkinson (1843–1936) as the Doulton Lambeth Pottery.  Closed in 1956. The Listing confirms that it covers the whole block, not just this extravagant corner which was probably the showrooms so this was the entrance for the customers. This 1895 map (where Black Prince Road is 'Broad Street') shows that the pottery used to occupy buildings to the north and south as well; only this block remains.

Isn't Victorian pride and confidence amazing? Barlow had joined the company only 7 years, Tinworth only 11 years, before this building was erected. Yet Doulton was self-assured enough to include not just his own portrait but theirs as well at the entrance to the building. Most modern companies occupy anonymous buildings with branding that can be rapidly removed and replaced, and certainly does not identify any of the individuals involved.

The sculpture is in the tympanum above the entrance door. See French Protestant Church - Soho Square for another lovely tympanum.

This section lists the subjects commemorated on the memorial on this page:
Henry Doulton's pottery

Born Bishop's Stortford. Studied at Lambeth School of Art where she was a stu...

This section lists the subjects who helped to create/erect the memorial on this page:
Henry Doulton's pottery

The current building obviously does not date back to 1714 and is not hugely i...

{On the ribbon wrapped around the milk churn:}Dairy Supply Co Limited